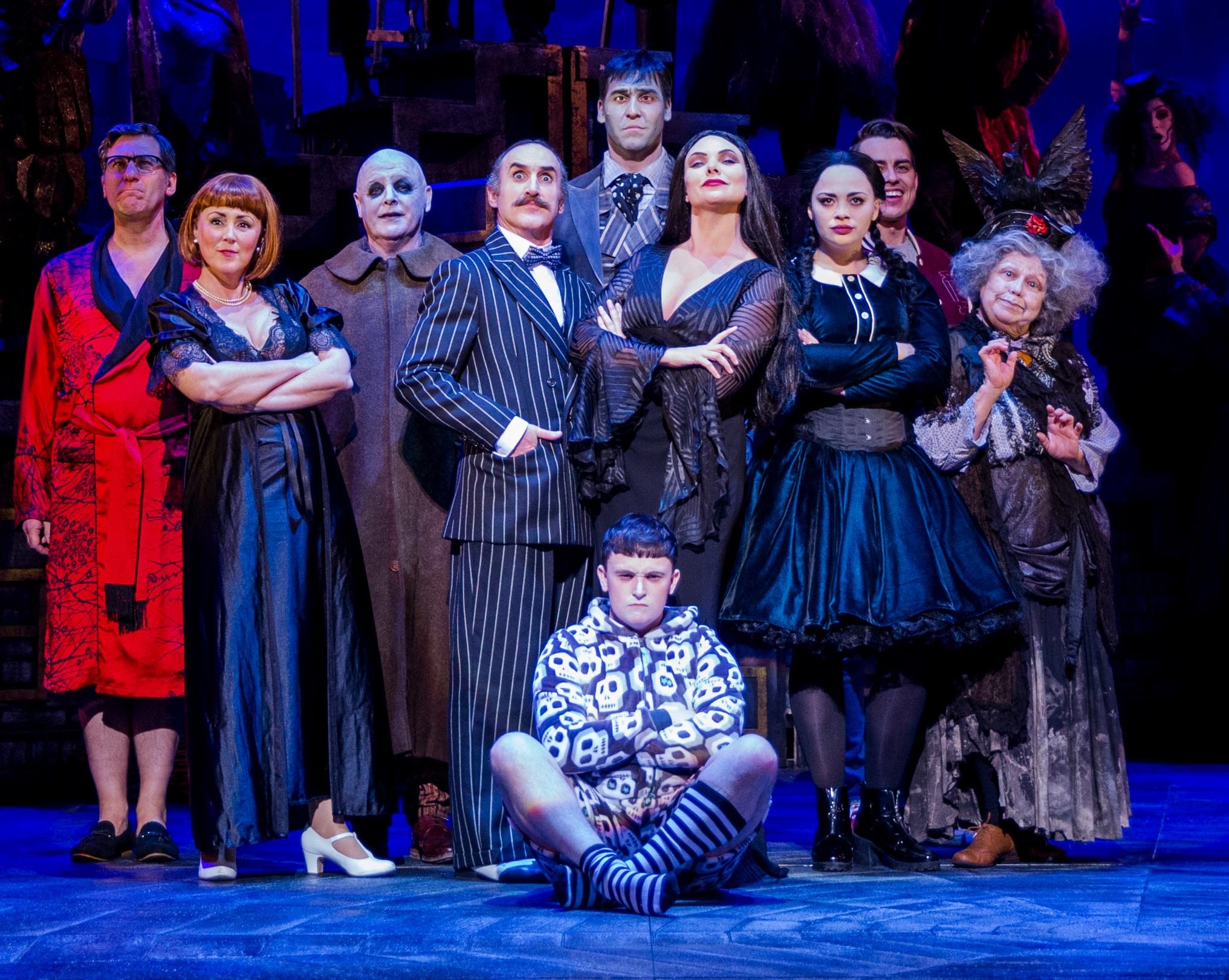 Against a misty backdrop of gothic manors, creepy phantoms, and thunderstorms, The Addams Family Musical cast bring a new brand of macabre comedy to everyone’s favourite misfit family. Originally created by cartoonist Charles Addams in the 1930s, the Addams Family is described as a satirical inversion on the idealised family unit. With an edge of aristocracy, the clan are thrilled by all things grim and ghoulish as it appears they don’t know or simply don’t care that ‘normal’ people find them strange and disturbing.

Appearing in cartoons in The New Yorker, the Addams Family were then immortalised in a live-action television series in the 1960s. Several adaptations of the characters were made including the hugely successful 1991 film The Addams Family and the 1993 sequel Addams Family Values starring Angelica Houston, Christina Ricci, Christopher Lloyd, and Raul Julia.

From the writers of mutli award-winning hit musical Jersey Boys with music and lyrics by Tony Award nominated Andrew Lippa, The Addams Family Musical makes its UK stage debut this autumn. Showing at Glasgow’s famous Kings Theatre from October 10-14, the musical comedy adaptation puts an acidic new twist on the Addams cocktail of the gothic mixed with glee.

The musical features a star-studded cast including EastEnders’s Samantha Womack as the hypnotic and seductive Morticia Addams, Les Dennis as Uncle Fester, Cameron Blakely as the brilliantly comical and animated Gomez, and Carrie Hope Fletcher, a revelation, as Wednesday Addams. The story begins with Wednesday keeping a dark secret. Contrary to Wednesday’s typical morbid persona, she falls in love with her polar opposite, a preppy jock with a clean-cut look, respectable parents, and no interest in torture with red hot pokers or shooting innocent targets with crossbows.

Fletcher seamlessly strikes the balance between Wednesday’s newfound soft side and the ice-cold demeanour, dark humour, and deadpan wit which makes her everyone’s favourite princess of darkness. As well as capturing the essence of the original character, Fletcher’s spellbinding vocals make her punk rock royalty.

As Wednesday’s secret grows bigger, she confides in Gomez, suspecting that her mother, the matriarch of the family, will disapprove of the unorthodox match. The bulk of the action takes place during an awkward, tantalising, and hilarious dinner as the Addams Family make an attempt to appear normal in front of Wednesday’s boyfriend Lucas and her sickly sweet potential in-laws. This task proves difficult considering a disembodied hand tends to walk along the dinner table, dead ancestors rise from their crypts, and characters in paintings take on a life of their own in the Addams’s haunted castle.

The hilarity of show is also provided by familiar faces including Pugsley, Grandma, Lurch, and the lovable Uncle Fester.

The making of a show starring such iconic characters is rooted in the set and costume design. Featuring Tim Burton style palettes of mystic purple, dusty chocolate brown, and blood red coupled with spiralling staircases, gothic landscapes, murky shadows, and vivid contrasting costumes, the aesthetic of the show is nigh on perfect.
This hilarious Halloween show has something for everybody and suitable for the whole family from children to adults and even those beyond the grave.

If you like dark comedy, theatrics, and all things gothic, The Addams Family Musical is a must see this October.

The Addams Family is at the King’s Theatre until 14th October.